Wow, what a fun trip! We kicked things off at the Blue Lamp in Sacramento. This is a great little place to play and Roger, who put the bill together is a super cool dude. The mysteriously monikered Musical Charis opened the show, and were great. A real talented bunch of kids. We went on second and perhaps did our best show of the week, which is all the more remarkable since it was Rob's first with us. He did an amazing job at all the shows. For this tour, Blue Skies For Black Hearts opened their sets with an acoustic number which they would perform from the bar. This worked especially well at the Blue Lamp, really getting a potentially apathetic audience involved in the music. Afterward, Rex, Rob and their entourage headed back to the city, while Jeremy and I stayed with our pal James, the consummate host as always.

Friday evening we high-tailed it to Fresno to play Audie's Olympic. This club (formerly Club Fred) really surpassed our expectations. Cool vibe, and an amazing sound system that rivals many of the clubs here in SF. We arrived just in time to see our friends the Bye Bye Blackbirds open the show. They were super solid as always. Our set got off to a rough start with some technical problems, but went OK. Fresno is freaking hot. I think it was the first show we've played without jackets. Ever! Blue Skies totally threw down the gauntlet that night. They were obviously blown away by the supreme awe inspiring wonderment that is The Parties in Sacramento so they retooled their set Friday in an effort to compete with us. I would say of the four shows of the tour that one was their best. Great energy and songs and the club's magic PA made them sound even more fantastic. Jeremy and Rex said these guys were good, but they're always blowing smoke up my ass so I was genuinely surprised that these boys had it in them. If it wasn't for our technical problems, I'm sure we would have handily taken the prize that night, but I gotta give it to Blue Skies. After the show the three bands had a nice 3AM tailgate party in the back of La Quinta, fulfilling Ian's (from the BBB) recent urge to drink beer in a parking lot. 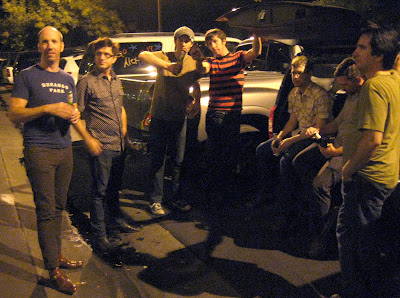 The next day on the way down to LA, we made an attempt to record a song in the car using the 4 Track app on my iPhone. I think we got a little ambitious. We decided to take a crack at the Who's "So Sad About Us" and in typical Parties fashion, we had to over-arrange the vocals. At one point we decided to do all the vocals live to one track which sounded great while we were recording but sucked royally on the playback. Rob, expressed it best when he said, "While you guys were singing I thought to myself, 'Wow, I'm part of something really special right now', but...(shakes head in pity)".

Saturday was our night at the International Pop Overthrow festival. We were excited to play the Knitting Factory for the first time, but I had no idea it was right in the thick of glitzy downtown Hollywood. So bizarre. I'm used to the NYC Knitting Factory which rests comfortably on a nice quiet block in SoHo, but this one might as well be situated in Disneyland. The sound (in the Front Room) was pretty terrible and once again we were plagued by technical problems. One thing the Parties do to compensate for an off night is to ramp up the excitement, so Saturday night Jeremy and I were jumping around like idiots. BSfBH once again turned in a nice solid set so I'm going to have to give that night to them too. After us was our pals the Waking Hours who cranked the enery level beyond the red. Holy living fuck. Things culminated in a frenzy with Tommy ripping bass strings off with his teeth and cracking the body of his Rick 330 completely in half. I had stepped outside during that part of the set and when I came back in, my bandmates were as white as a sheet and Jeremy showed me a photo of the destruction. I once read an article about Eric Rudolph, the dude who set off a bomb at the 1996 Olympics and lived in the Appalacian wilderness as a fugitive for five years. At one point, during Rudolph's self-imposed exile, his brother, in an act of protest against the government's ongoing pursuit of his sibling, cut off his own hand with a table saw and mailed it to the FBI. I got the same chill down my spine when I first read that part of the article as I did when I looked at Jeremy's photo of Tommy and his destroyed guitar. The look of detached mania in Tommy's eyes is something that will haunt me for years to come. But they sounded great and were totally badass!! The highlight of the evening for me was hanging out (albeit breifly) with my friend Paul who I've known since first grade and hadn't seen in 10 years. He heard about the show like a 1/2 hour before our set time and cruised over. Paul rules!

Sunday morning we took Jeremy's friend Ray - who kindly put the four of us up - out to brunch, then headed down to Long Beach for our final night in SoCal. We hooked up with the BSfBH boys at the Yardhouse and had some tasty beers. Afterwards, Jeremy and I dropped Rex and Rob off at the motel for a nap and headed over to a BBQ where The Commotions were scheduled to play. The Commotions feature our friend Marriane who is soon to be married to our other friend Shawn from the New Fidelity. Shawn, Dan and Billy from New Fi were all there and we had a lovely old time hanging with them. Unfortunately, we had to leave before the Commotions set to load in at the Que Sera where we were scheduled to play that night. We put them on the guest list and were delighted that they all showed up for our show later on.

Sunday night, as we had hoped and anticipated, was a complete blast. Blue Skies and The Parties were scheduled to play with a local band, that never showed up, giving us ample time to set up and check the sound and ultimately dick around on stage! We got Mike from Blue Skies to join us on "Breaking Hearts" and took a stab at "Radio" with Pat and Paul. We even got the New Fi to help us with a couple Who covers. Complete drunken chaos but fun as shit. Wayne Everett from Lassie Foundation and Terry from Greater California were also in attendance. Next time, we'll have to get those guys up on stage. 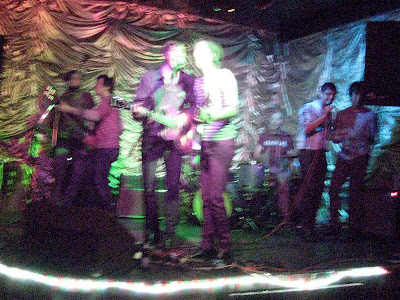 It was at the end of that night that we parted ways with BSfBH who were headed down to San Diego for one last show before heading back up north to Portland. I can't adequately convey how much fun we had with these dudes. I met them all not a week ago and they already seem like brothers.

Thanks to everyone who came out to our shows over the past four days. We all had a ton of fun playing music for, and hanging with y'all. We're all totally excited to head down that way again soon.
Posted by Rawnickel at 9:44 PM 3 comments: