A few weeks ago we hopped on a plane and flew out to NYC to play the Rainbow Quartz Showcase at CMJ.

"I'll have a bloody mary and heinekin please."

All that you can't leave behind.

We were invited over for an amazing sushi dinner by the wonderful Joe Chonto and his equally wonderful wife Ren. Man this was just what the doctor ordered! Good food, wine, and a place for Adam to restring!

Posted by Jeremy at 1:21 PM No comments:

Good times all around!
Call you local college radio station and tell them you want to hear The Parties! We've been added to a ton of stations across the country.
And if you're in SF tonight come have a drink with us and dig on the psychedelic light show.
Posted by Jeremy at 1:02 PM No comments: 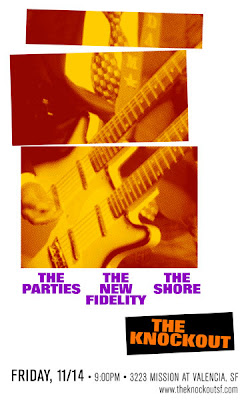 Posted by Rawnickel at 6:55 PM No comments: 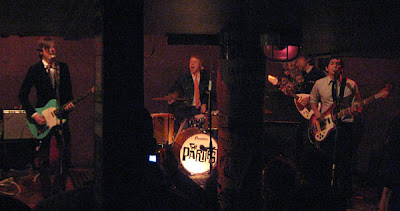 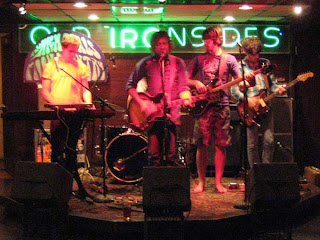 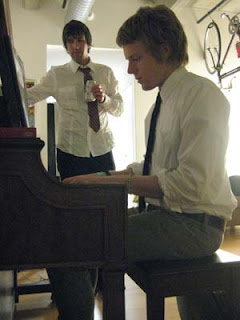 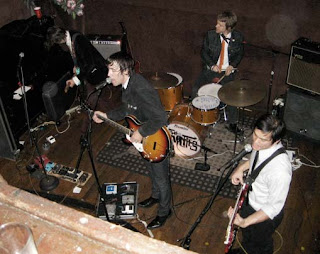 So, my pal, just gave me a copy of the new Oasis record. Grand stuff!
There are a couple of sluggers on the new LP, but overall, it's pretty darn good.


Here are some of my other favorite OASIS tunes. I'm especially nuts about
Heathen Chemistry.

1. Little By Little
2. Song Bird
3. Born on a Different Cloud
4. Stop Crying Your Heart Out
(all off Heathen Chemistry)
5. Let There Be Love
Honorable Mention-Lyla

Zak Starkey is playing drums on the new record, which is also pretty rad.
But, in true Oasis fashion, he was fired like all
the other drummers who have come before him.
Posted by JM at 8:05 PM No comments:

mods and the rockers

Today, we are helping some dear friends at Lambretta Works open their vintage scooter shop.

It's a family fun affair, with DJ GO GO Guillermo spinning psych and soul from 730-9PM, and we go on right after.

Lambretta Works is located in the Mission at

Bring your scoot, and shake a tail feather. And for those who are interested in purchasing a vintage Lammy, this will be an excellent time to come and sniff the merchandise.

Other valuable links: http://www.scooterbbs.com/
http://autos.groups.yahoo.com/group/bay_area_vintage_scooterists/message/839
Posted by JM at 9:53 AM No comments:

guess i'm the last one to get on the bandwagon...again! nevertheless, here's my list.

after seeing jeremy and adam's posts about their favorite beatle tunes of all times, i think i need to jump on the bandwagon. so, here is top ten BEST!!! and ten WORST!!!!

Anyway I just found out an interesting fact on Wikipedia. Capitol released Yesterday and Today in June 1966 which includes 3 tracks that appear on the British Version of Revolver which wasn't released until August 1966. So basically America got to hear I'm Only Sleeping, Doctor Robert, & And Your Bird Can Sing before before the Brits!
Posted by Jeremy at 1:20 PM No comments:

Parties rehearsals as of late have been great as we prepare to release our new record. Adam is an awesome guitar player, watch out for our dueling 12 strings! So we've been tightening up all the tunes on the record but we've also been having a little fun playing all kinds of covers, some for real like who tunes and kinks tunes, but most of the time we're just fucking around. We did rock n' roll by led zeppelin the other night, the INXS Kick record, and a bunch of hair metal tunes, but last Tuesday night we played a Beatles tune and it was bad ass! So we are going to cover it. I told the band that it was in my top ten of all Beatles songs and I got to thinking, well is it? With so many rad songs could I actually condense this list into 10 songs? Here's my first try...
10. Tomorrow Never Knows
9. I Feel Fine
8. Dr. Robert
7. I'm Only Sleeping
6. You've Got to Hide Your Love Away
5.  I Should've Known Better
4. If I Needed Someone
3. She Said, She Said
2. Rain
1. And Your Bird Can Sing
It's kind of Revolver heavy! Songs on that just missed the cut...Lovely Rita, Don't Let Me Down, Ballad of John and Yoko, Across the Universe, Don't Bother Me, You Can't Do that, Sexy Sadie.
John? Adam? Rex? Maybe we can get a band consensus.
Posted by Jeremy at 12:02 PM 2 comments:

Everyone owes it to themselves to track these down:
http://www.rollingstone.com/news/coverstory/20200609/page/20

I know I'm supposed to be opposed to piracy, so if you don't own any of that stuff currently, I suggest going the record store, buying all the Beatles CDs, throwing them in the garbage, then downloading the needle-drops.
Posted by Rawnickel at 9:48 AM No comments:

Holy crap, the second half of 2008 is going to be crazy. We have a bunch of shows booked around the time of the record release, including a CMJ show in New York and the record release party at Hotel Utah. We'll be hitting the pacific NW at the end of the year and we're also trying to line up another jaunt down to LA. Watch this space for upcoming details.
Posted by Rawnickel at 9:22 AM No comments:

We are the Parties.

Welcome to our blog. Here you will find all manner of ramblings from the four members of the bay area rock combo The Parties. Topics will most likely include (but will not be limited to) the following: live shows, recording, guitars, skinny pants, drums, scooters, beer, other bands, and quality footwear.
Posted by The Parties at 2:18 PM No comments: